skip to main | skip to sidebar

SG Market: S’pore shares are set to open lower for a 4th straight session, tracking overseas cues as investors turn jittery over developments in the European soap opera, including increased expectations the upcoming EU summit would not provide any resolution. For broader risk trends, it appears a case of 'once bitten, twice shy' across markets ahead of this week's EU summit, given the risk of disappointment European leaders will once again fail to produce a crisis-fighting 'blueprint,. Initial support for STI is likely at around 2800, followed by 2750. Among stocks likely in focus, OCBC is setting aside an additional $500m for share buybacks, while K-Reit raised its stake in Ocean Financial Center to 99.9% from 87.5% for about $228.4m, which will be partially funded via a 60m share placement at $1.17 or 15% above the last close. GLP may be in good light after signing 2 leasing agreements in southern China. 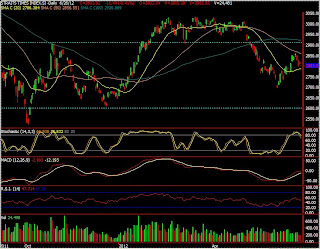